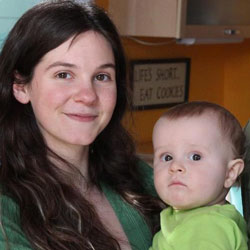 Marielle had just moved to the UK from the US with her husband and her young son. As they didn't have Broadband set up at home, she was using her phone to access the Internet but when she tried to read an article on the feminist blog Jezebel.com, it was blocked. Called “Stop acting like 'bouncing back' from labor is even possible”, the article criticised the fact that there is no paid maternity leave in the United States and many women have to return to work after only 6 weeks. Marielle says, “I was so excited to move to a country with sane maternity leave policies, only to find I couldn't even read an article about it!”

When she found that the entire blog was blocked, she became angry: “I felt like feminism had been singled out for censorship, because if a major feminist blog like Jezebel was blocked, how would other, smaller sites fare?” Getting Three to lift the block was, “an arduous process, and very embarrassing. The manager told me that I couldn't access filtered articles without entering a 4 digit pin because I had a PAYG plan.”

As a parent, Marielle doesn't think that filters work when it comes to protecting children. Her greatest concern for her child is online bullying and harassment: “Most harassment comes from private communication, like SnapChat, or Facebook, or Twitter, or even just e-mail - all things that filtering doesn't address in the slightest. When my son gets old enough I'll have to have open and honest conversations with him about how much information he should share about himself online, how to use privacy controls and how to block people who are harassing him. While I'm at it, I might as well talk about all that other stuff as well!”

www.jezebel.com was blocked on Three in July 2014