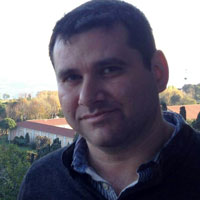 Aidan van de Weyer found that EE was blocking access to a political blog on the Syrian War by commentator Aboud Dandachi (pictured). Aidan says: “Preventing people seeing information about the war solely because that information is unpalatable seems to me to be a very damaging form of censorship because it hides the realities of the war.

“I have found that non- or semi-professional social media journalists have added hugely to the understanding that I have of events in the Middle East over the last three years. This has only happened because these people can voice their views and spread their information freely. The filtering hasn't affected my daily life (just like the war hasn't), but it has shown me directly how dangerous the unintended consequences of filtering could be.”

adandachi.com/istanbul/ was blocked on EE, O2, Sky and Vodafone in July 2014